Doug Lerner reports from Tokyo and St. Louis, and points beyond…

This were taken just before, by the river. It has sort of a lonely feeling to it, but the lighting is interesting. You should be able to click on it and see it larger. 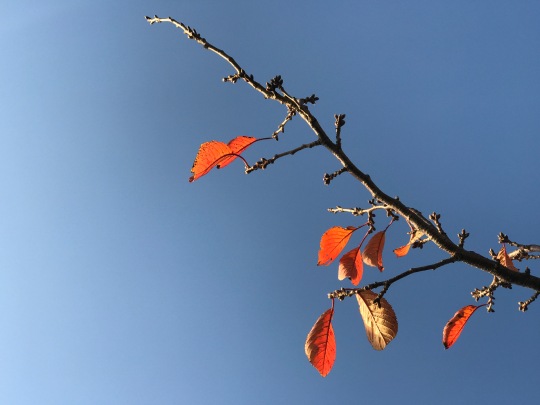 Sakura along the Nakagawa

The cherry blossoms along the Nakagawa here in Shinkoiwa are not in full bloom yet. And the day is a little hazy. I think it will take another few days before they are in full bloom. I’ll keep checking. Still, they look nice. 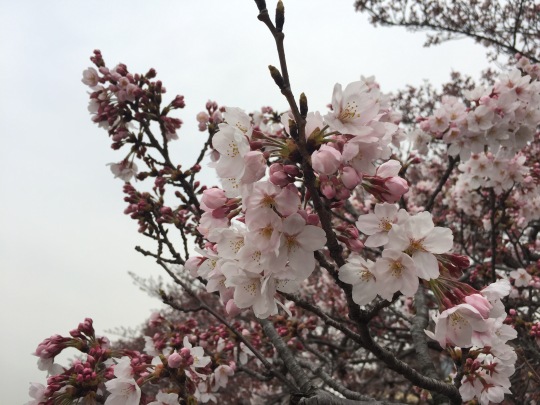 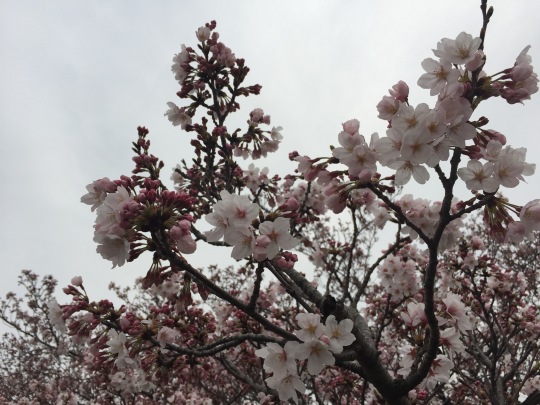 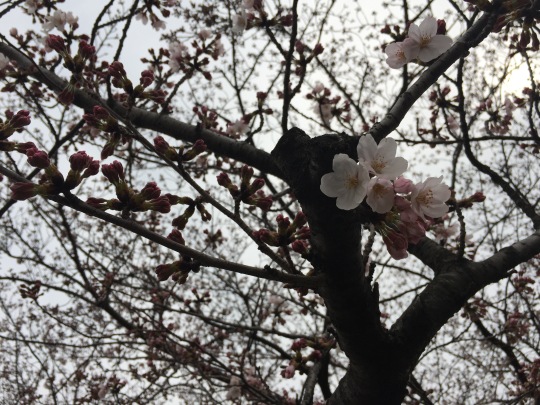 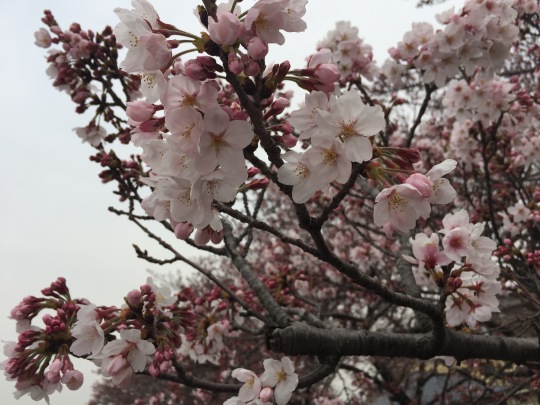 Sakura are starting to bloom

I cycled down to the Nakagawa and can confirm that the sakura are, indeed, starting to bloom. Just a very few so far. I believe the prediction is for full bloom about 10 days from now. 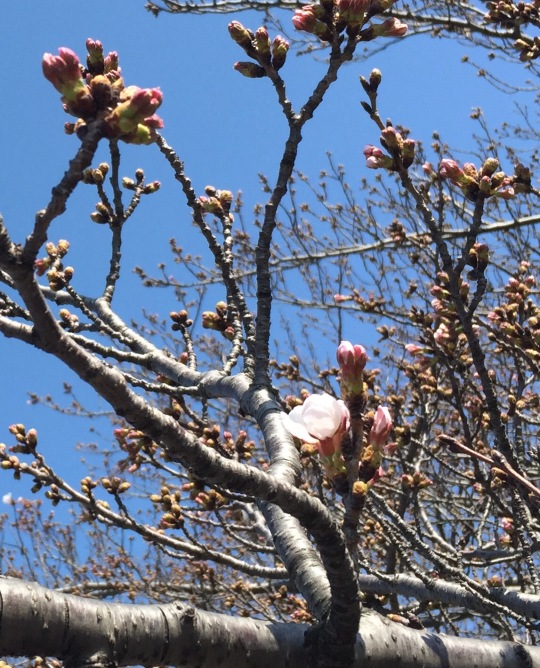 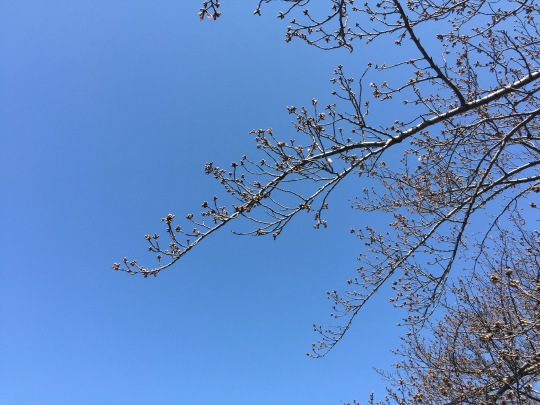 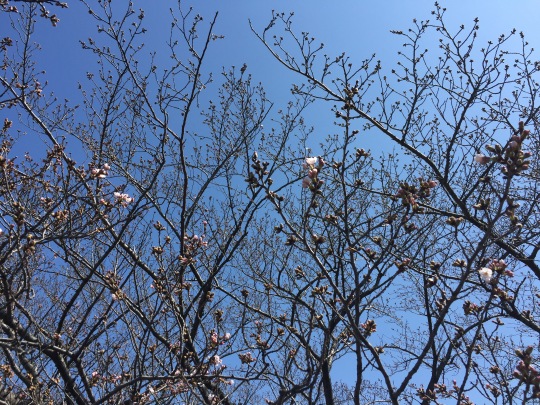 Mon and Monta this evening

I don’t know why, but sometimes Monta likes hanging out on top of his swing instead of on the perch of his swing. It seems like a very unnatural, uncomfortable place to sit. But he likes it. 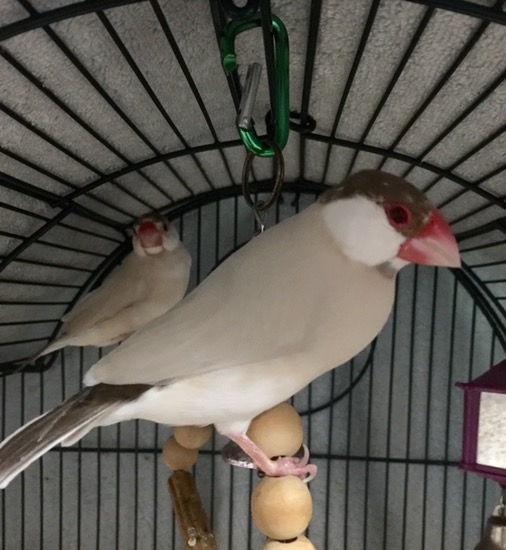 It was 5 years ago today. I was at the supermarket and thought I felt a rumbling sensation. I asked the store clerk and he didn’t feel anything. Then shelves started swaying and things started falling down. I left quickly for the exit, encouraging others to leave as well.

Outside I had to hold onto a bicycle rack to stop from falling over. It was clear that this was the largest earthquake I had ever experienced.

People milled around outside for a while, and then the store manager announced they were closed for the rest of the day.

I headed back to my house, where I found neighbours hanging around outside and heard for the first time it was the largest earthquake in Japan’s history, a magnitude 9.

Inside, I found a lot of things had fallen down, including ceiling light fixtures. But mostly everything was OK.

The phones were down, and the trains had totally stopped, but amazingly the Internet kept on running.

After that everybody knows what happened.

An article worth glancing at about “the woman in the blanket” – then and now.

From Yahoo Politics, Reuters and the NY Times:

The national GOP committee will essentially concede the election to Hillary if Trump wins the nomination.

Senate Majority Leader Mitch McConnell has assured Senate candidates running for reelection that they can run ads against Donald Trump even if he wins the GOP nomination for president.

According to the New York Times, senators attending private lunches with the Majority Leader have been advised to take the position that Donald Trump will lose badly in the general election and should prepare themselves for a Hillary Clinton presidency.

Former Secretary of State Hillary Clinton got some good Super Tuesday news on Saturday night: an endorsement by the Minnesota Star-Tribune.

“We believe Clinton is the clear choice over Sanders for heart and head alike. A force on the national landscape for more than 30 years, Clinton has distinguished herself in foreign and domestic policy in ways that make her well-suited to represent the party in November,” the Star-Tribune editorial said.

The endorsement is a blow to Sanders, as Minnesota is a priority target of the roughly dozen contests on Super Tuesday. The editorial said Sanders’ vow to bring a political revolution has not been backed up by specifics on how he would do that.

I’ve posted a Q&A taken from the Kaiser Family Foundation about the new health care law at my site: http://lerner.net/qa-about-obamacare/.

Please visit http:/lerner.net to keep in touch going forward. Thanks!

Why does hot water freeze faster than cold water?

If you have nothing better to think about today, how about trying to solve this old scientific puzzle?

“Why does hot water freeze faster than cold water?”

It seems a simple enough question – yet it has baffled natural philosphers for at least 2,300 years.

Now the Royal Society of Chemistry is offering £1000 to the person or team producing the best and most creative explanation of the phenomenon, known today as The Mpemba Effect.

I’m not a big fan of what the hospital euphemistically calls “cardio rehab” (hint: “exercise”), but I bought a bicycle and have been cycling along a nearby river, the Nakagawa. In fact, I just got back.

I can’t describe how much more fun it is, and how much quicker time goes by than it does on my indoor exercise bike (which is almost as boring as a treadmill).

Today I increased my distance and went on to the “second bridge” which is near Aoto. It really gets green over there. There’s a big sports field, and also a couple of small boat piers.

I actually left my house intending to go shopping, and then go for a bike ride in the late afternoon, when it got a bit cooler. But I found myself drawn to the river.

Also, I am definitely increasing strength. A somewhat daunting hill I had been stopping and walking up I took today with ease.

I can’t believe I’m saying it, but I’m actually looking forward to my cycling trips.

Please visit and follow my new blog at lerner.net. Thanks!