Doug Lerner reports from Tokyo and St. Louis, and points beyond…

Torrential rains in my neighborhood

Something about the high winds blowing in the background, and the seasons changing so suddenly made me just slump over in my chair around noon, listening the sounds of nature outside.

Finally I dragged myself out of my slumber and shook myself awake, figuring I ought to do some grocery shopping. But… what was that sound? I looked outside and saw this (click to see video – expand to full screen for best effect). Huge, torrential, sweeping rains. An umbrella won’t help here.

Well, I hope anybody who is out and about are managing to find a snug, dry place to hole up until this passes by.

Since yesterday there have been extremely strong, balmy winds blowing through Tokyo. They were strong enough to keep you awake at night, and are still swirling around and howling outside.

This happens every year, and seems to mark the true beginning of spring in Japan. So except for pollen sufferers, most people seem really happy that winter is finally over.

I am looking forward to a very low electric bill next month!

Obamacare, the mandate, the Commerce clause and the single-payer option

I agree with Eugene Robinson’s column. If Obamacare is ruled unconstitutional the only real alternative is a single-payer system. That is clearly constitutional (see Medicare).

But I hope the argument which was made at the end of the 2nd day of Supreme Court deliberations, that health insurance is inseparable from health care and everybody does use health care, is sufficient to convince the course that the insurance mandate falls well within the Commerce clause.

73 sieverts laid to low water; level will even cripple robots
Radiation inside the reactor 2 containment vessel at the Fukushima No. 1 nuclear plant has reached a lethal 73 sieverts per hour and any attempt to send robots in to accurately gauge the situation will require them to have greater resistance than currently available, experts said Wednesday.

Exposure to 73 sieverts for a minute would cause nausea and seven minutes would cause death within a month, Tokyo Electric Power Co. said.

The experts said the high radiation level is due to the shallow level of coolant water — 60 cm — in the containment vessel, which Tepco said in January was believed to be 4 meters deep. Tepco has only peeked inside the reactor 2 containment vessel. It has few clues as to the status of reactors 1 and 3, which also suffered meltdowns, because there is no access to their insides.

The utility said the radiation level in the reactor 2 containment vessel is too high for robots, endoscopes and other devices to function properly.

Spokesman Junichi Matsumoto said it will be necessary to develop devices resistant to high radiation.

High radiation can damage the circuitry of computer chips and degrade camera-captured images.

For example, a series of Quince tracked robots designed to gather data inside reactors can properly function for only two or three hours during exposure to 73 sieverts, said Eiji Koyanagi, chief developer and vice director of the Future Robotics Technology Center of Chiba Institute of Technology.

That is unlikely to be enough for them to move around and collect video data and water samples, reactor experts said.

“Two or three hours would be too short. At least five or six hours would be necessary,” said Tsuyoshi Misawa, a reactor physics and engineering professor at Kyoto University’s Research Reactor Institute.

The high radiation level can be explained by the low water level. Water acts to block radiation.

“The shallowness of the water level is a surprise . . . the radiation level is awfully high,” Misawa said.

While the water temperature is considered in a safe zone at about 50 degrees, it is unknown if the melted fuel is fully submerged, but Tepco said in November that computer simulations suggested the height of the melted fuel in reactor 2’s containment vessel is probably 20 to 40 cm, Tepco spokeswoman Ai Tanaka said.

Tepco has inserted an endoscope and a radiation meter, but not a robot, in the containment vessel. It is way too early to know how long Tepco will need to operate robots in the vessel because it is unknown what the devices will have to do, Tanaka said.

A Quince was exposed to radiation of 20 sieverts per hour for a total of 10 hours, and the device worked fine, Koyanagi said. If the team conducts further experiments, it may find out the robot can resist even more radiation, he added.

According to experts, even though high radiation in the containment vessel means additional trouble, it is not expected to further delay the decommissioning the three crippled reactors, a process Tepco said will take 40 years.

The experts noted, however, that removing the melted nuclear fuel from the bottom of the containment vessels will be extremely difficult.

Tepco inserted a radiation meter into the containment vessel of reactor 2 Tuesday for the first time, measuring atmospheric radiation levels at several points inside the vessel. The readings logged 31.1 and 72.9 sieverts per hour.

Tepco has not been able to gauge the water depths and radiation levels of the containment vessels for reactors 1 and 3, as, unlike unit 2, there is no access.

I tried leaving Mon’s eggs in the nest this time to see if it would discourage her from laying eggs each month.

What she has been doing this week, though, is every day she’ll throw an old egg out of her nest and lay a new one, leaving 6 at any time.

Dual jolt could trigger Tokyo temblor up to magnitude 9Kyodo

Two previously unknown active faults were found off the Boso Peninsula in Chiba Prefecture, with one researcher warning that a jolt in the two faults at the same time could trigger an earthquake of magnitude 8 to 9.

The two faults, one at least 160 km long and the other more than 300 km, were found on the floor of the Pacific Ocean around 100 to 200 km southeast of the southern tip of the peninsula, according to a group of researchers from Hiroshima University, Nagoya University, the Japan Agency for Marine-Earth Science and Technology and other parties.

“The faults have been unmarked and uninvestigated. There is a possibility of strong jolts and tsunami reaching the southern Kanto region (including Tokyo) and the Tokai region (central Honshu). It should be promptly investigated in detail,” said research group member Mitsuhisa Watanabe, a professor at Toyo University.

The group will report its findings at a Thursday meeting of the Association of Japanese Geographers in Tokyo.

The group used a bathymetric chart made by the Japan Coast Guard to analyze the geography of the seafloor in detail. It then estimated the location of the active faults by taking into consideration cliffs formed by earthquakes and other elevated features.

According to Watanabe, the two faults were found near a “triple junction,” a point where the boundaries of two oceanic plates and a continental plate meet.

Both north-south faults run parallel. The longer fault to the east has a cliff with a height of more than 2,000 meters, while the other one has a cliff more than 3,000 meters high formed by earthquakes, indicating the high possibility that both have repeatedly caused big quakes, he said.

North of the two faults is a focal region for the 1677 temblor, which had an estimated magnitude of 8.0, and the magnitude 7.4 quake that hit in 1953. But the faults seem unrelated to the two quakes, which were likely caused by movement of another active fault, Watanabe said, adding the past movements of the two faults remain unknown.

Active faults have previously been seen as having little connection to earthquakes that occur near ocean trenches. But the same group confirmed last year the existence of a 500-km active fault on the ocean floor along the Japan Trench, which is believed to have moved when the massive earthquake and tsunami disaster hit the Tohoku region last March.

Eat and stay thin with tapeworms! I sense a revival of this amazing diet! 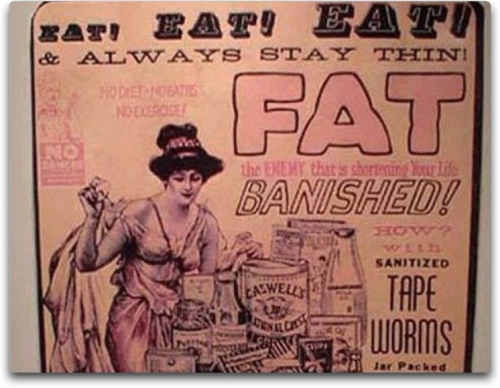 Sugar – only 18 calories per teaspoon!

And it’s all energy!

Please visit and follow my new blog at lerner.net. Thanks!